Building community one song at a time.

Celebrating 26 Years as one of the premier choral groups in Southern California, Angel City Chorale (ACC) reflects the spirit and diversity of Los Angeles in its membership, its music, and its outreach activities. Equally committed to good music and good deeds, the chorale is dedicated to “Building Community One Song at a Time.” Celebrated Artistic Director Fink founded ACC at the world-famous McCabe’s Guitar Shop in 1993 with 18 singers. ACC has now grown to over 180 talented and dedicated singers who present a broad and eclectic repertoire including classical, gospel, jazz, pop and world music.

Most recently, Angel City Chorale competed on NBC’s top-rated talent competition America’s Got Talent, making it all the way to the SemiFinals. Hailed by Simon Cowell as “one of the best choirs we’ve ever had,” ACC earned the coveted Golden Buzzer, touching nearly 20 million viewers with their rich sound and compelling message of unity and diversity.

ACC has also performed at venues throughout Los Angeles, including the Walt Disney Concert Hall, the Dorothy Chandler Pavilion, the Kodak Theater, and the Nokia Theater at LA Live. The choir has appeared on national and local television and worked with artists such as Stevie Wonder, Mary Chapin Carpenter, Luther Vandross, and Natasha Bedingfield.

True to their mission of community building, Angel City Chorale is collaborating with the Boys & Girls Clubs of Los Angeles County in forming the Angel City Youth Chorale. This pilot program continues to foster the arts and provide the youth of Los Angeles a safe place to explore their musical talents. The program is in its second year with the Boys & Girls Clubs of Venice and Santa Monica and is expanding its reach to Burbank and the San Fernando Valley.

ACC is proudest of its ongoing commitment to the Los Angeles community. Through the gift of song, donations, and volunteerism, the group supports several Los Angeles non-profit organizations serving those in the community who need it most. Central to ACC’s mission is its annual Holiday Tour of Hope program. Over the past 15 years, ACC has taken its holiday concert repertoire directly to more than 30 service organizations in Los Angeles. In addition to the gift of music, ACC donates food, personal items, clothing, and supplies to these organizations.

MISSION STATEMENT: Angel City Chorale is an accomplished community choir providing artistic growth and peak musical opportunities for its members and our audience. Embracing diversity in our membership and in our music we seek to “Build Community One Song at a time” by fostering spirited musical, educational, and adventurous community-making experiences in our home of Los Angeles and throughout the world.

"If I had died during this performance, and this is heaven, I'm happy, because that's what it felt like. That was sensational!"

"It was everything a performance should be. Polished technically and delivered with uninhibited joy by individuals who truly love what they are doing."

Our video of the song “Africa” spreads joy around the world, with more than 40 million views and counting. 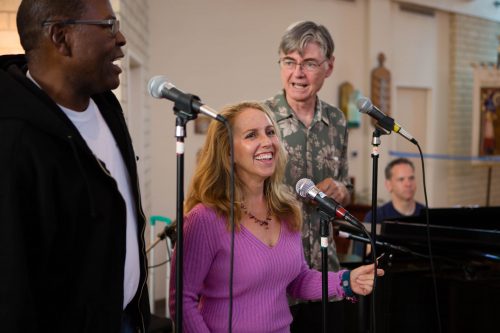 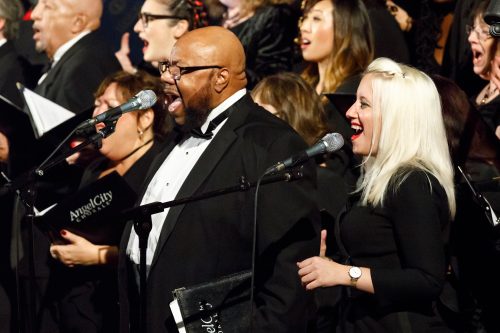 Building Community Here and Beyond Our Borders

We give the gift of song, we volunteer our time, and we donate money and goods to Los Angeles non-profits serving those in the community who need it most.

Holiday Tour of Hope program: we sing at soup kitchens, homeless shelters, nursing homes, hospitals, and sober living facilities - more than 30 service organizations in Los Angeles in the last 15 years. Often our music is accompanied by donations of food, clothing, and supplies.

ACC partners with the Amy Foundation, an organization working to bring sports, arts, music, and education programs to the children of South Africa’s townships.

In 2011 we traveled to Cape Town to perform concerts benefiting the Foundation. Then we brought the Amy Foundation choir from Africa to L.A. in 2018 for a week of music, learning, and fun – singing with us at our One World, Many Voices II concert.

Angel City Chorale is a California Non-Profit Public Benefit Corporation and 501(c)(3) nonprofit organization. Your donations help us bring music to the community.